Clients often ask us about gold as a hedge against inflation, recession, and financial stress. In this post, we shed some light on this question.

Throughout history, gold has been used as money or a relative standard for currency equivalents. The gold standard has been abandoned only in recent times; for the British Pound in 1931, for the U.S. Dollar in 1971, and the Swiss Franc in 2000. Moreover, especially in more turbulent times, many voices are advocating monetary policy reforms and a return to the gold standard .

Gold is a hard asset; it has a beautiful, shiny color; it is heavy and doesn’t corrode. Through the ages, gold has preserved a high value and has been a way to pass wealth from one generation to the next. With all this history, the idea of using gold as a safe haven investment comes as no surprise. When considering the use of gold as a hedge against portfolio risks, we need to be a little more specific though: which particular risks are we trying to hedge against?

Gold is often seen as a hedge against inflation, and weakness of the U.S. Dollar. Both of these views boil down to an expectation of gold prices rising at a faster rate than the prices of other goods and services.

To find out if this is true, we use the U.S. Consumer Price Index for All Urban Consumers as a proxy for inflation. Next, we plot the gold price versus the consumer price index over time: 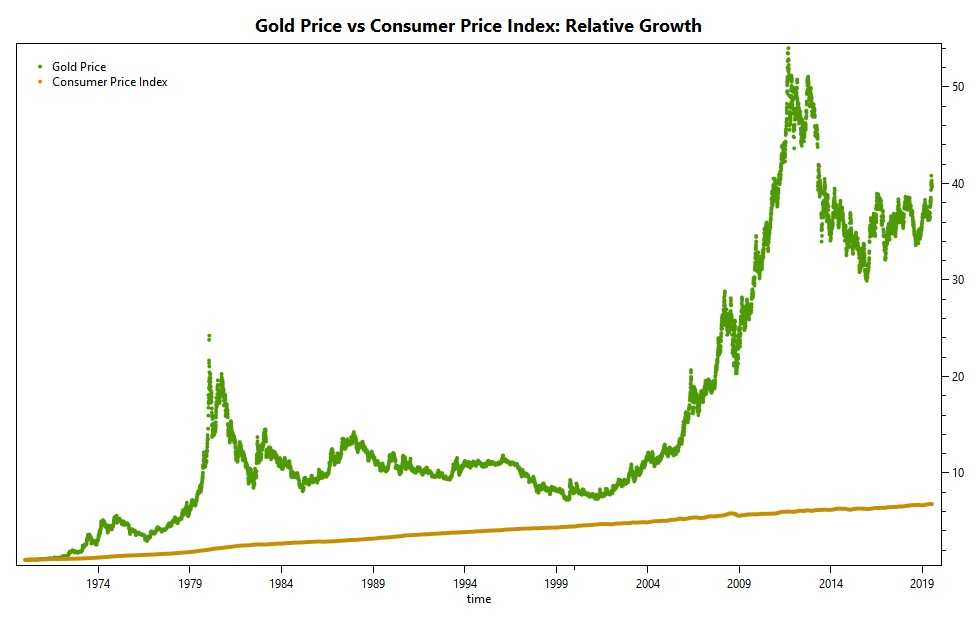 Looking at the chart, we find that there is no clear answer. Instead, the answer depends on the investor’s individual perspective : 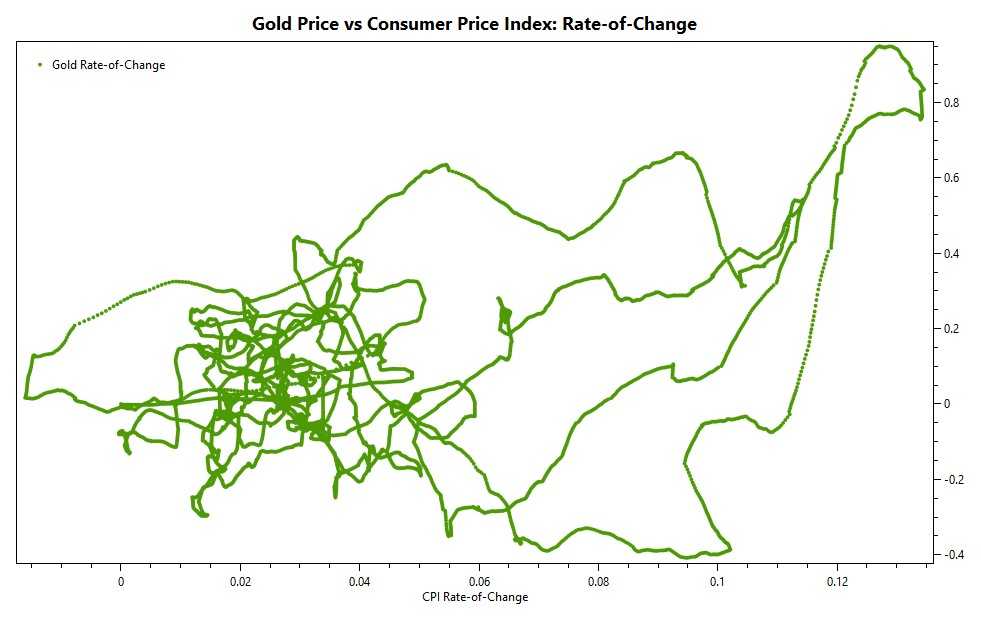 The resulting chart looks a bit like a Rorschach test. The value of these charts lies in freeing our thinking of the time component and focusing on the relationship between the variables instead. If gold was a good hedge against inflation, we should see the rate of change increase with inflation. The resulting chart would feature a strong upwards sloping trend.

Interpreting the chart, we notice that the fastest growth in gold prices indeed coincides with the highest inflation, as seen in the lead-up to gold’s 1980 peak. Overall the chart’s squiggly lines do not seem to slope up, however. Instead, gold’s momentum appears mostly independent of the inflation rate.

Concluding, we see no strong evidence of gold being a useful hedge against inflation.

Gold is also seen as a hedge against financial stress. To measure financial pressure, we use the following indicators:

Both indicators create sharp peaks during recession periods. We create plots similar to the ones we created previously: 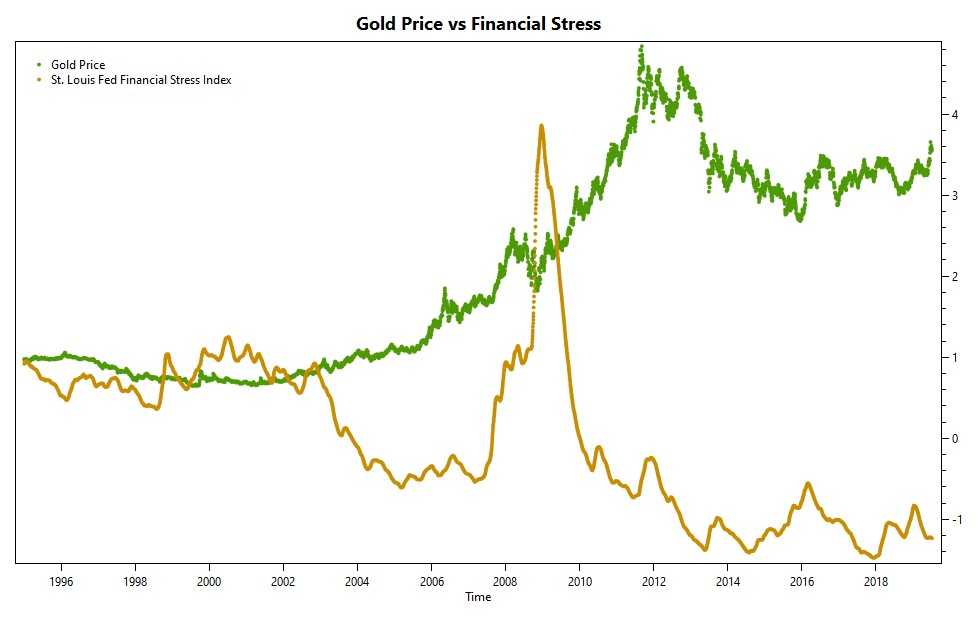 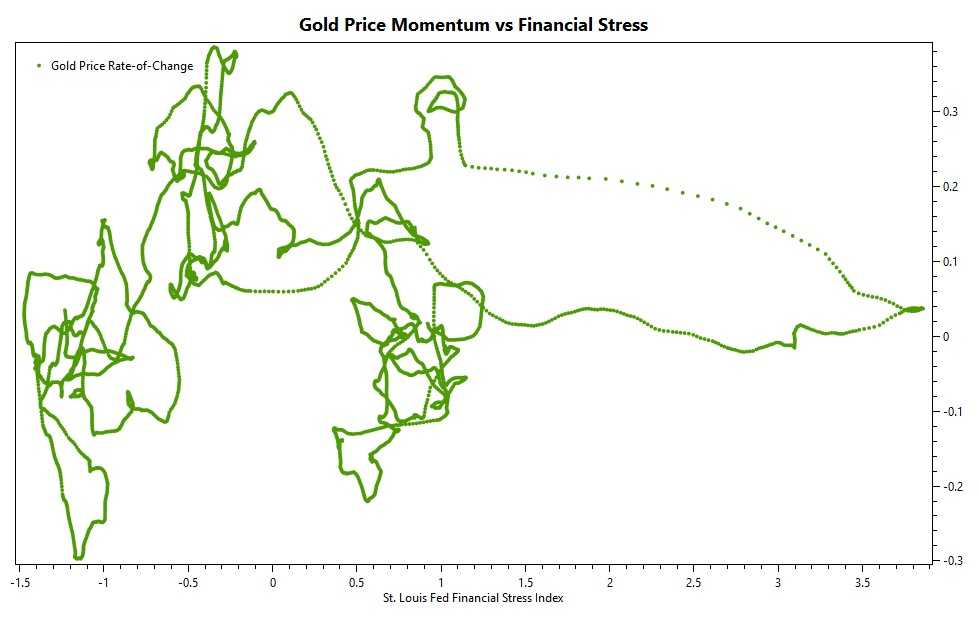 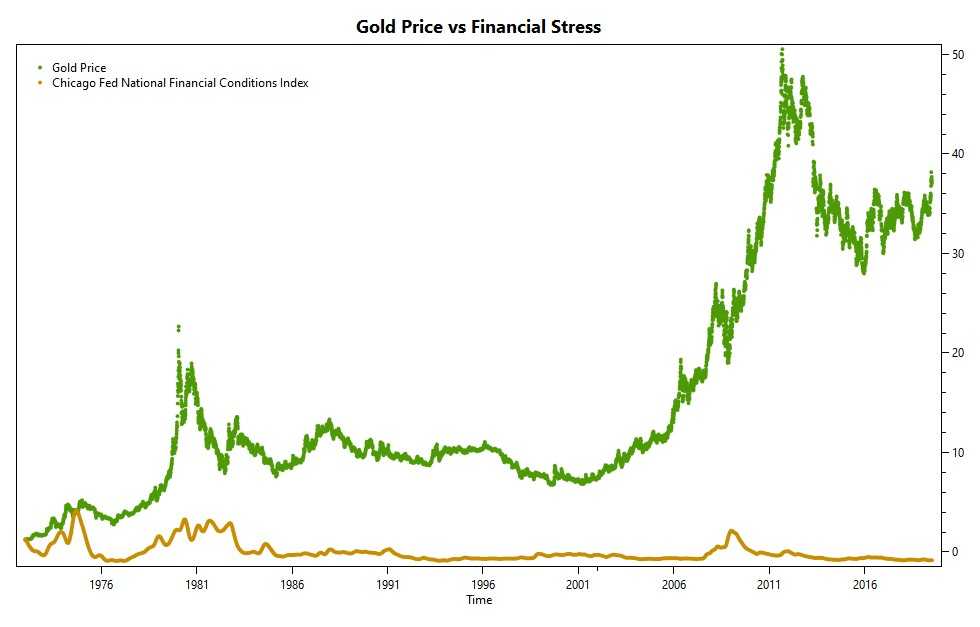 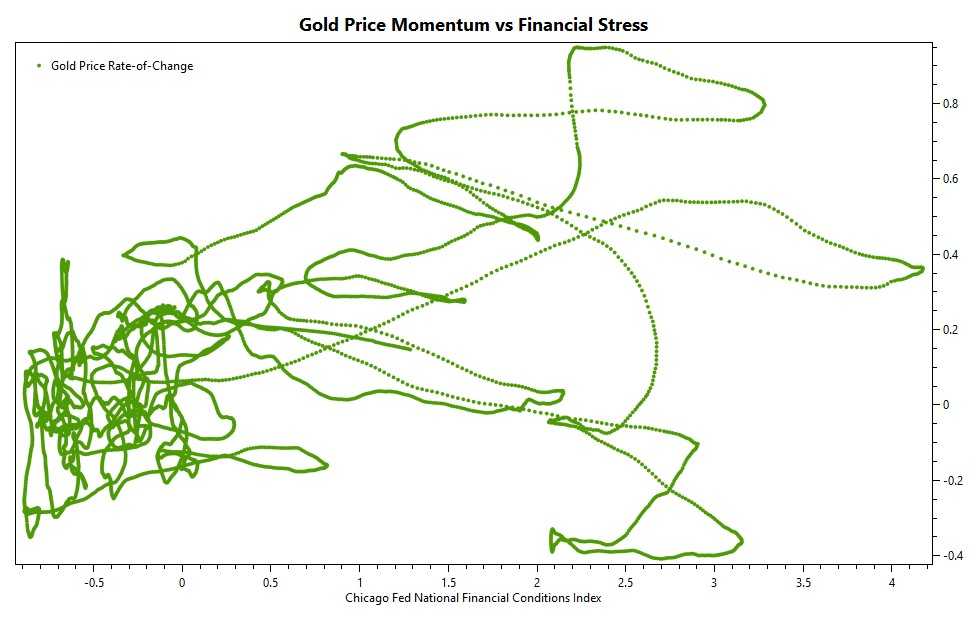 Plotted over time, we see how the gold price is rising in the late 1970s in tandem with the stress indicator, but then falling sharply while the stress level is still high. Similarly, gold has a rising trend, mostly unaffected by the 2008 recession. The scatter plots are even more clear: gold’s price momentum is independent of financial stress.

Based on these charts, we can’t agree with the idea of gold being a hedge against financial stress.

Other sources suggest gold as a hedge against recession risk. We measure this risk using the following indicators:

As before, we create plots both over time, and as a scatter: 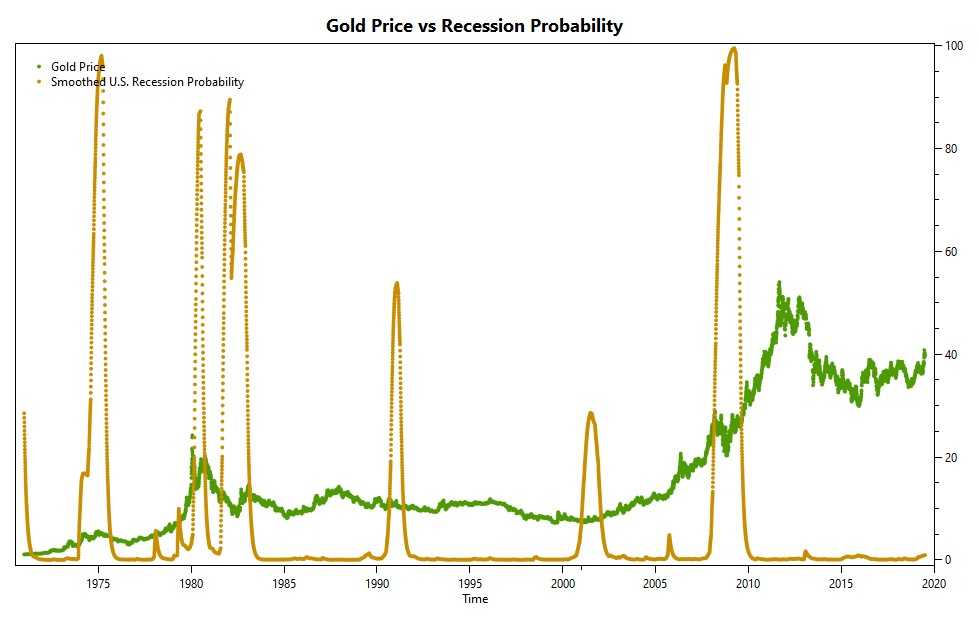 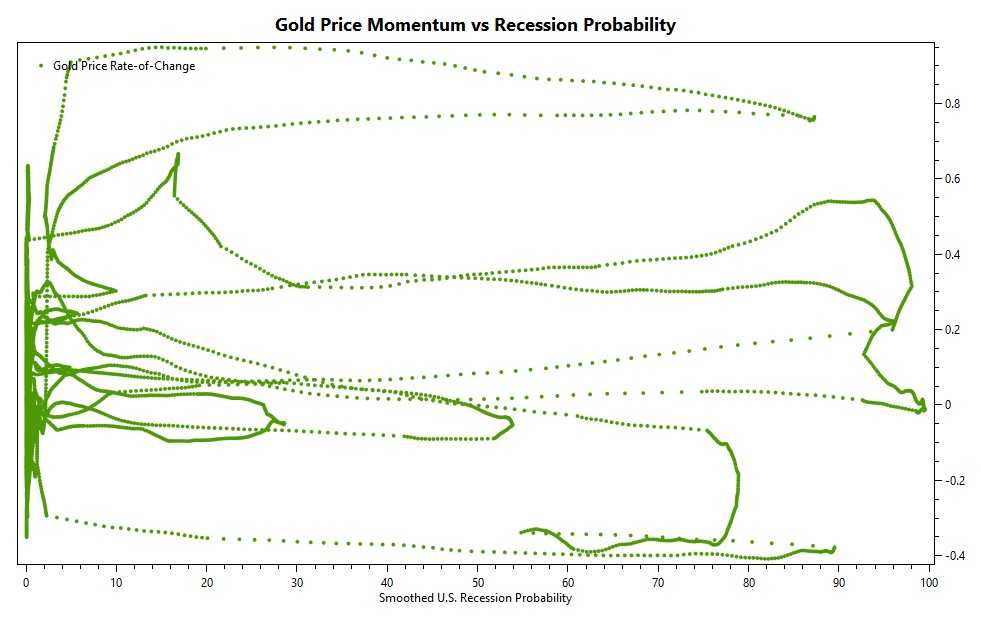 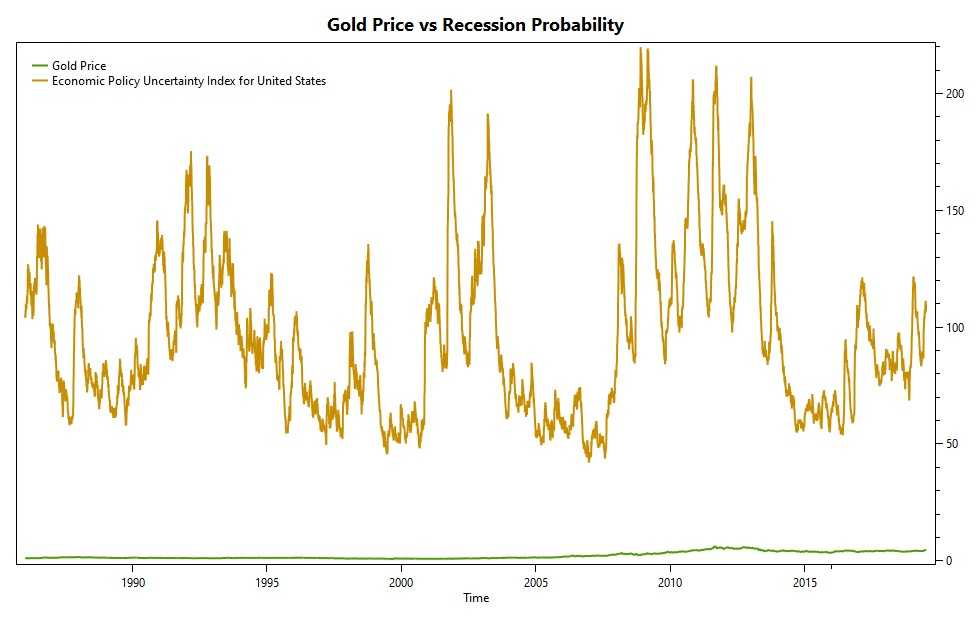 All of these charts feature long strains of horizontal lines, showing how gold’s momentum stays constant across wide ranges of the indicators. Based on these charts, we have to reject the idea, of recession risk or economic uncertainty driving gold prices .

Finally, people even see gold as a hedge against market risks. We can measure market risk as the S&P 500 Index’s rate-of-change, and create a new set of plots: 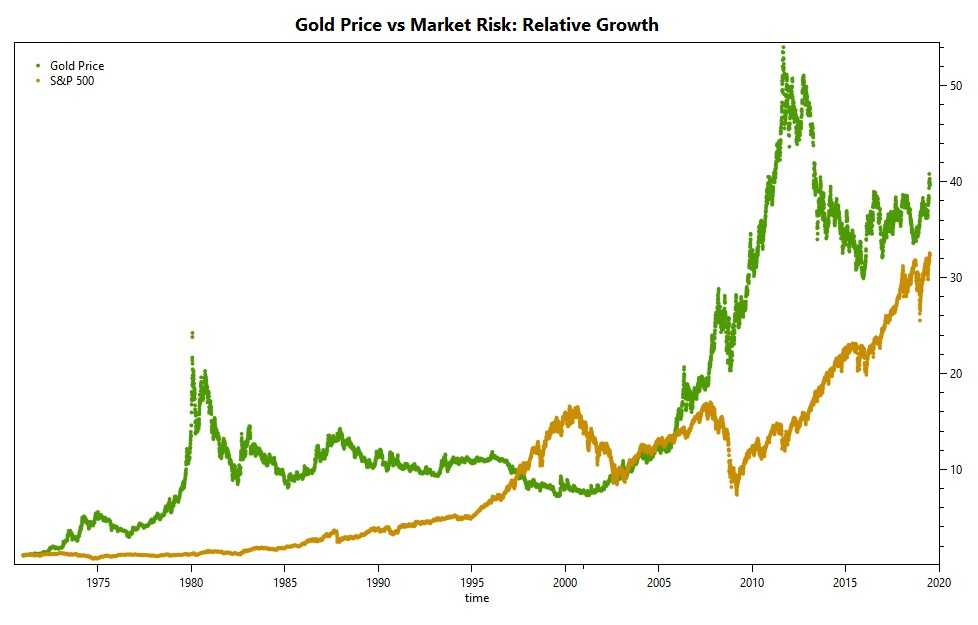 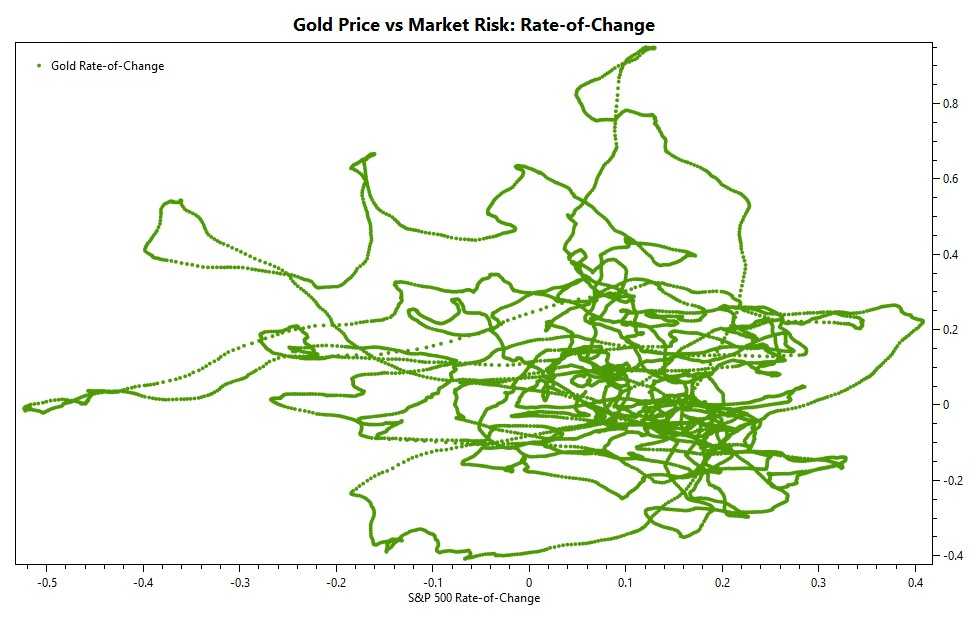 Again, we cannot establish any correlation between the price of gold and the indicator.

We ran quite a few experiments, hoping to establish a correlation between gold prices and measures of investment risks. All of these experiments failed, and we are unable to state with any level of confidence that gold is a useful hedge against the risks investigated. What a disappointment! However, instead of seeing this as a failure, there might be another way to interpret these results.

It is quite remarkable to see the price of gold so independent of all these factors. Given that the stock market shows sensitivity to most of them, we can conclude that gold prices are highly uncorrelated from the stock market. As over the last 50 years, gold has appreciated about as much as the S&P 500 has, gold might be useful to diversify a portfolio.

With this use-case in mind, we need to determine how much of our assets we want to allocate towards gold. Given that gold has shown much deeper and longer lasting drawdowns than the stock market, it should only be a minor position with a long time horizon.

As Investment Advisers, we are in the business of advising on the value of securities. Precious metals are not securities, though. However, there are exchange-traded products available, which aim to track the price of gold. As an example, here is a chart comparing SPDR’s Gold Shares to the price of gold : 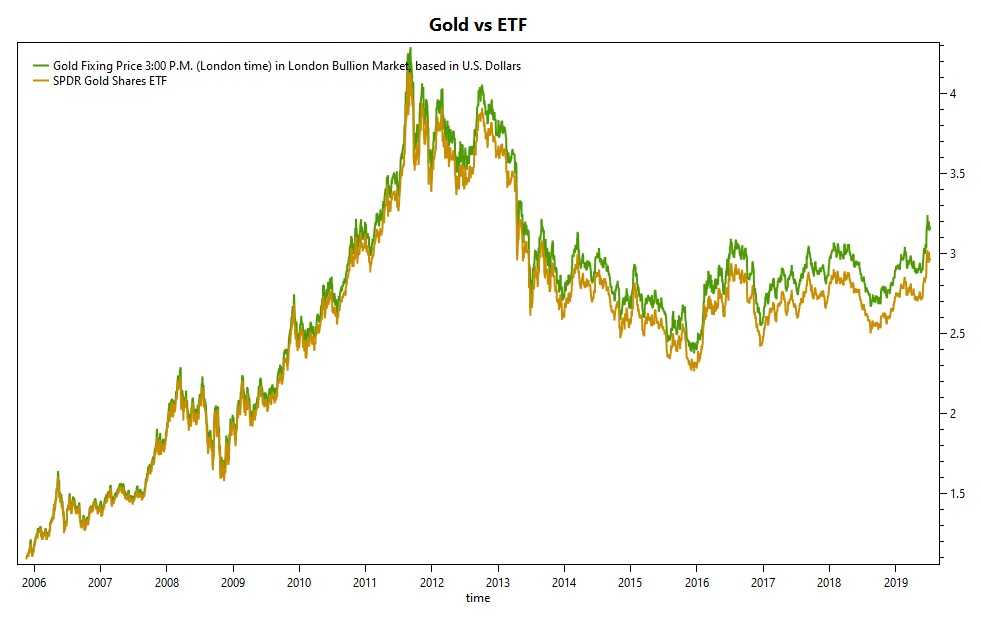 We can see how the ETF tracks the gold fixing price very closely. There is a slight underperformance of the ETF, which is caused by its expense ratio of 0.4%.

However, we found gold to be highly uncorrelated from the stock market, which may make it a welcome portfolio addition for those investors with a desire for such an instrument. Given that gold historically poses a higher risk than the stock market, investors should keep the allocation to gold small, though. Further, we recommend substituting physical gold with a gold ETF, achieving higher liquidity, and avoiding the difficulties of storing physical gold.

We very much hope that we’ve been able to answer the question if gold is a good hedge against typical portfolio risks. At Bertram Solutions, we pride ourselves in doing independent research, and this post is a good example of our approach to analyzing investments.