Right now, we hear about a looming recession almost every day, while the stock market continues to soar. This raises the question how economy and stock market are related, and how we can use this relationship to protect our portfolios from undue risk.

Typically, investors diversify their wealth towards multiple asset classes, most importantly stocks and bonds. Participation in the stock market is the driver for growth, but also the major contributor to portfolio risk.

Stock market and economy have a complex relationship. Here is my favorite description:

“There’s an excitable dog on a very long leash in New York City, darting randomly in every direction. The dog’s owner is walking from Columbus Circle, through Central Park, to the Metropolitan Museum. At any one moment, there is no predicting which way the pooch will lurch. […] But in the long run, you know he’s heading northeast at an average speed of three miles per hour. What is astonishing is that almost all of the dog watchers, big and small, seem to have their eye on the dog, and not the owner.”
- Ralph Wagner, fund manager

It should come as no surprise that the stock market is related to the overall economy. The question is, if we can somehow quantify this relationship, and in doing so improve our investment decisions. As a first attempt, we plot the S&P’s 12-month growth versus GDP growth in the same time period: 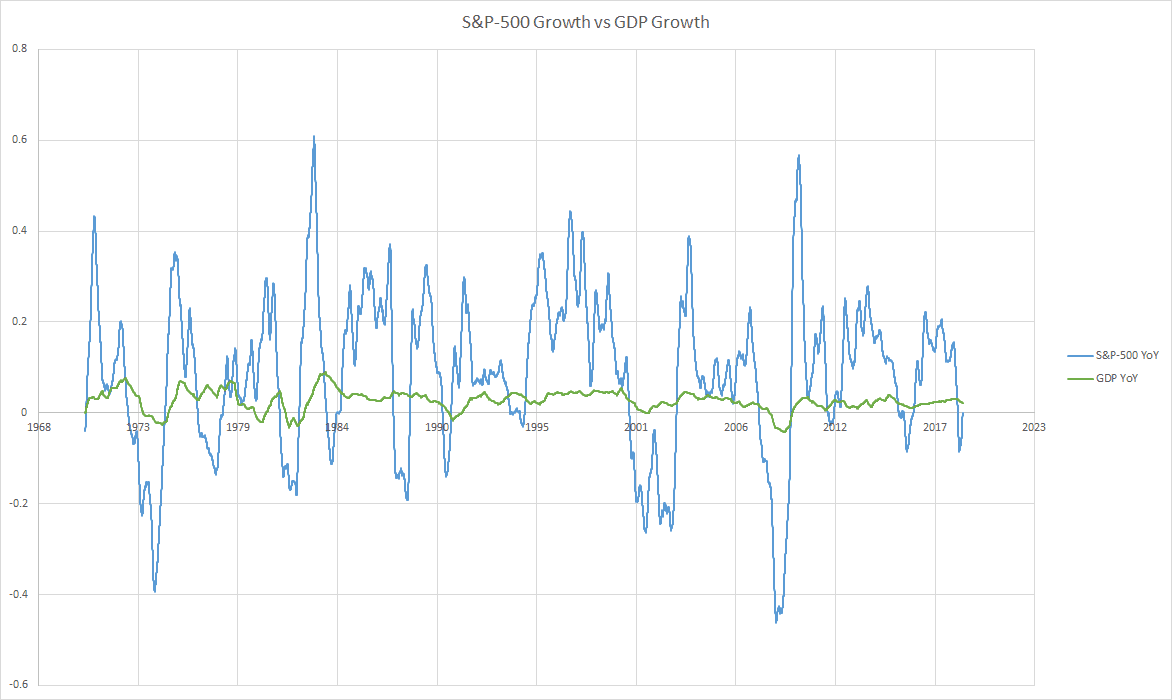 The chart shows 6 of the past 7 recessions:

We find that the S&P-500 is much more volatile than the GDP. We can also see, that drops in the stock market tend to be less severe, if not also accompanied by a drop in GDP. This relationship suggests that including the state of economy in our investment decisions has the potential to improve our rate of success. Unfortunately, the stock market tends to lead GDP, so GDP cannot be used to predict the stock market. We have to revert to other leading indicators instead.

The Federal Reserve Bank collects thousands of data series with valuable information about the state of our economy, and publishes these data through the Federal Reserve Economic Database (“FRED”). The following series are often considered leading indicators:

That’s a lot of data to go through! And, just like the dog and its owner above, they might point into different directions, making interpretation ambiguous and difficult. Luckily, the Federal Reserve is as much interested in a conclusive picture of the economy, as investors are. The Chicago Fed National Activity Index (“CFNAI”) combines 85 of these leading indicators into a single number, and provides detailed background information to aid interpretation:

But how can we use this indicator to support our investment decisions? Our own research at Bertram Solutions led to the following findings:

We have developed our own proprietary indicator to time stock market participation. We tested this indicator over the past 7 recession periods, spanning 49 years with a simple strategy: invest 100% in S&P 500 while economy is good, and stay in cash otherwise. The simulation shows how we can catch almost all of S&P’s gains, while successfully avoiding recession periods: 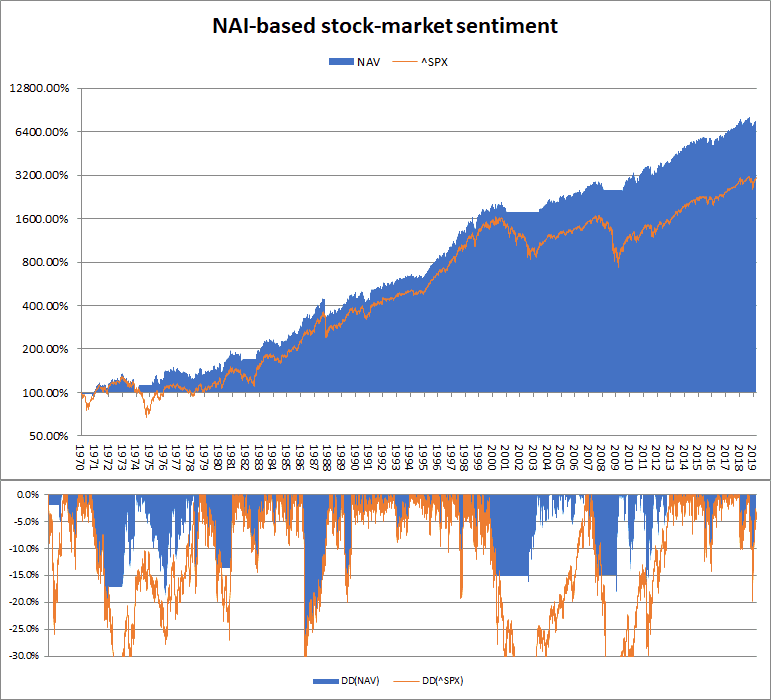 Investing in the stock market has been a bumpy ride in the last quarter of 2018. The S&P-500 has had a great rebound since, coming close to make new all-time highs in April 2019. At the same time, we are receiving mixed signals about the economy, triggered by the yield-curve inverting in March 2019. Many investors wondered about their next move at the time.

The CFNAI shows that the economy had certainly weakened. However, the levels were still quite a bit away from the point where the start of a new recession became highly likely. This combined with the concurrent S&P-500 rally led us to believe that investors should stay their course, and not make any changes to their portfolios.

We very much hope that this post provided some valuable insight into the relationship between the economy and the stock market, and how to use that to guide portfolio decisions. At Bertram Solutions, we pride ourselves in doing independent research, and this post is a good example of our approach to analyzing investments.